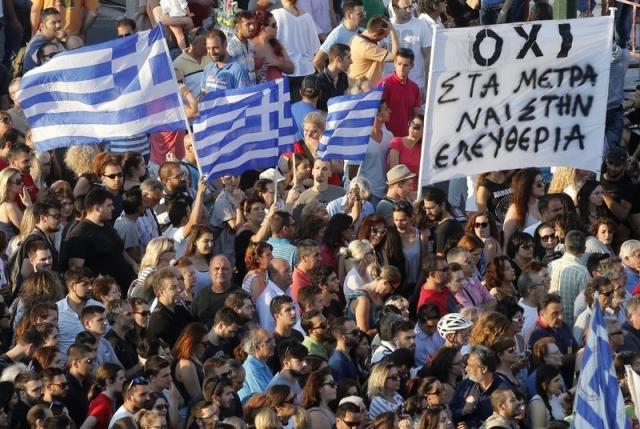 WHY IS EVERYTHING THAT CROATIAN NEOLIBERALS DO AND WRITE TO THE DETRIMENT OF PRIVATE CAPITAL Open Letter to the Public Following the Results of the Greek Referendum The results of the Greek referendum could mark a turning point, both for Europe and Croatia. Had Greeks yesterday chosen to submit rather than resist to the insane […]

The results of the Greek referendum could mark a turning point, both for Europe and Croatia. Had Greeks yesterday chosen to submit rather than resist to the insane cost-cutting policy, this would signal that no one objects to the policy, which has caused an economic slowdown for a whole decade and would only further suffocate the entire continent. The same applies to Croatia as such policy would leave the country underdeveloped with the brightest young people leaving the country as fast as they can. Uninformed epigones from both of the two major Croatian parties will now think twice before pursuing a policy that serves the interests of the financial circles of certain developed European countries.

Greek resistance makes it possible for Europe to preserve its democratic identity, while preventing technocratic power centres, with no support from European citizens, from dictating their decisions to European countries. Only those who answer to the political establishment instead of their voters would label the referendum of an entire nation as an attempt by its government to avoid responsibility (we cannot help noticing that the Dutch minister Dijsselbloem spoke quite differently when the Dutch rejected the EU Constitution in their referendum).

Regardless of its intention, yesterday’s referendum makes it possible for Greece to leave the unfortunate euro-zone and to return to its national currency as the best and quickest way to restore competitiveness of the Greek economy. The greatest economists of today share this opinion even when they come from opposing economic schools (Werner Sinn, P. Krugman, P. Bofinger, V. Klaus, J. Stiglitz). Nevertheless, great deceivers in this country, the neoliberal zealots from the ranks of the economic profession, politics and the media (Šonje, Budimir, Drljača, Vujčić, Novotny and others) keep on pushing us where the most self-confident European nations refused to go (Sweden, Czech Republic, Denmark, Great Britain).

Their activities resulted in the prevalence of twisted, disparaging and malevolent messages about Greece in the Croatian media (but partly in the European media too). As we read, we find countless phrases about “lazy Greeks who refuse to pay their debts”, even in the public media.

Ironically, these neoliberal crusaders and a part of the privately owned media believe that what they write and do is in the interest of the private sector. The prevailing economic doctrine in Europe differs significantly from the one in the USA. The US policy of saving the consumption right at the beginning of the crises quickly produced results. The German policy of cutting down the demand has been failing to produce results for seven years now. The private sector suffered most due to such economic doctrine as this sector has the greatest interest in the growth, investment and job creation. These days, the USA reached the lower unemployment rate than the 2007 rate.

The Greek government is trying to solve their problems based on the latter economic doctrine applied in the USA in the times of crisis. The Troika prevents them from doing so, as they persistently insist on the continuation of the austerity policy (although IMF researches themselves confirm that the Greek government’s approach is the right one).

Since Croatian neoliberal ideologists delude themselves that their doctrine is the superior one, they think they have every right to label, underestimate and accuse their opponents. As a result of their influence, we find animosity towards the Greek people and their government in the majority of the media, which prevents people from realising what Greeks are actually doing for Croatia as well as for the whole of Europe. It should be made clear that the yesterday’s referendum was in fact a referendum on the choice of such economic policy that would produce results during the crisis, that would prefer growth instead of stability, not the other way round (we find the greatest stability in the cemetery, but no growth there).

It is in the Croatian national interest to dispel myths and delusions about Greece. For example, the media failed to inform Croatian citizens that, besides irresponsible Greek governments, the imprudent introduction of the euro to an economically inhomogeneous area in the interest of the financial and corporate sector of the most developed countries is to blame for the Greek situation before 2010.

They have also not been introduced to the fact that from 2010 onwards, the debt crisis grew into a general economic and political crisis and, lately, a crisis of European democracy due to the fiasco of the cost-cutting and belt-tightening policy advocated by the so called Troika.

They have also not been introduced to the fact that the Greek public spending dropped by 38% and that its public debt increased in spite of that, because a public debt increase is a relative number (ratio between numerator and denominator). The public debt increased from 120% to 180% since the Troika arrived to Greece (in May 2010) not because Greeks spent more, but precisely the opposite, because they spent less. Due to the reduced spending, the country’s GDP (denominator) dropped by one quarter, which resulted in an increase in the public debt shown in percentages in relation to the lower GDP. The Croatian media presented this percental increase due to the drop in production as Greek overspending.

Just as they have not been introduced to the fact that the same has happened to the total amount of funds for pensions which again recorded a percental increase for the same reason, the drop in the GDP, although the former Greek government carried out the strictest pension reform in Europe.

And finally, most importantly, nobody has told them that what Syriza stands for is not a matter of ideology, of socialism or capitalism, left radicalism or centrism, étatisme or the market, that it is neither a matter of nation’s character, laziness or morals (debt repayment as a moral issue), as we are being led to believe on a massive scale. For the sake of better understanding, left radicalism includes comprehensive nationalisation, suspension of the law of markets, private ownership and democracy. Surprisingly enough, Croatian neoliberal Talibans have not noticed yet that Syriza is not a radical party (independent of its name). They advocate a concept of solving the country’s debt crisis within the capitalist and market economy based on the doctrine Obama applied. He himself said recently, when talking about Greece, that you cannot squeeze someone out of whom there is nothing to squeeze.

It is an approach which makes capitalism possible and which essentially suits everyone, the workforce and entrepreneurs and investors alike. However, it does not suit the financial circles, whose short-term or even short-sighted perspective presents the greatest threat to the capitalist mode of production.

Therefore, this is an authentic social democratic pro-European option, whose ideas are far more useful for the private sector than the ideas preferred by Croatian neoliberals. Perhaps things would seem clearer to them, should the anti-European nondemocratic Right replace Syriza (which might be likely). They might perhaps regret then for each lie or nonsense they said, like the one about “parlour leftists”. “Parlour” supposedly means separated from the people. I believe the author of this unimaginative stereotype realised yesterday to what extent Syriza is with its people.

Vilim Ribić
President of the Association of Croatian Trade Unions

The PDF version of the Open Letter is available for download here.